The ‘My Self’ series is an ongoing research series about the Self and the identification process.

For the third part of this series I am researching the convention of my body. The audio of my body to be specific. This work is titled ‘My Self, the Body’, for which I am investigating the internal body sounds without the direct use of computers or audio software during a live performance. I am using my two reconstructed micro phonic stethoscopes to do a live body investigation from which the internal sounds will be directly amplified into the space; the life that lives and communicates inside me. I create unpredictable rhythms by transforming my body into a resonance (box).

This work was especially developed to be launched at SXSW2018 (South by South West in Austin, Texas, USA) in collaboration with The Living Museum.

Joost van Bellen was there, in Austin, and wrote about his experience during my live performance (many thanks, dear Joost):

“I had the immense pleasure of undergoing a surprise performance by Lisette Ros, during my visit to Austin, Texas’s South By South West festival. FYI: I have been around and saw and heard many artists and their shows. It’s not easy to blow me away. But Intervening Space by Mme. Ros did.

‘INTERVENING SPACE: My Self, the Body’ is a disturbing experience. It alienates but at the same time devours the viewer. It’s science fiction artificial, showing a lifelike malfunctioning robot woman, laid out naked and covered in what might well be transparent synthetic body fluids. But the robot body slowly starts to come alive and moves to animal like convulsions and spasms and from seductive to downright explicit porn-star like positions.

The only sound heard is her body: her breath, her bowel movements, her heartbeat, the blood that rushes through her veins. It’s a complete mind fuck: a strange naked alien body that makes your brains and loins work over time.

‘INTERVENING SPACE: My Self, the Body’ has to be experienced in these times of conservatism, narrow mindedness, bigotry, fake online personas and a future filled with humanoids, artificial intelligence and sex robots.”

Read the article Jay Gabler wrote about The Living Museum at SXSW2018 for ‘The Current’ here. Video underneath by © Moving Creations (Sound on). 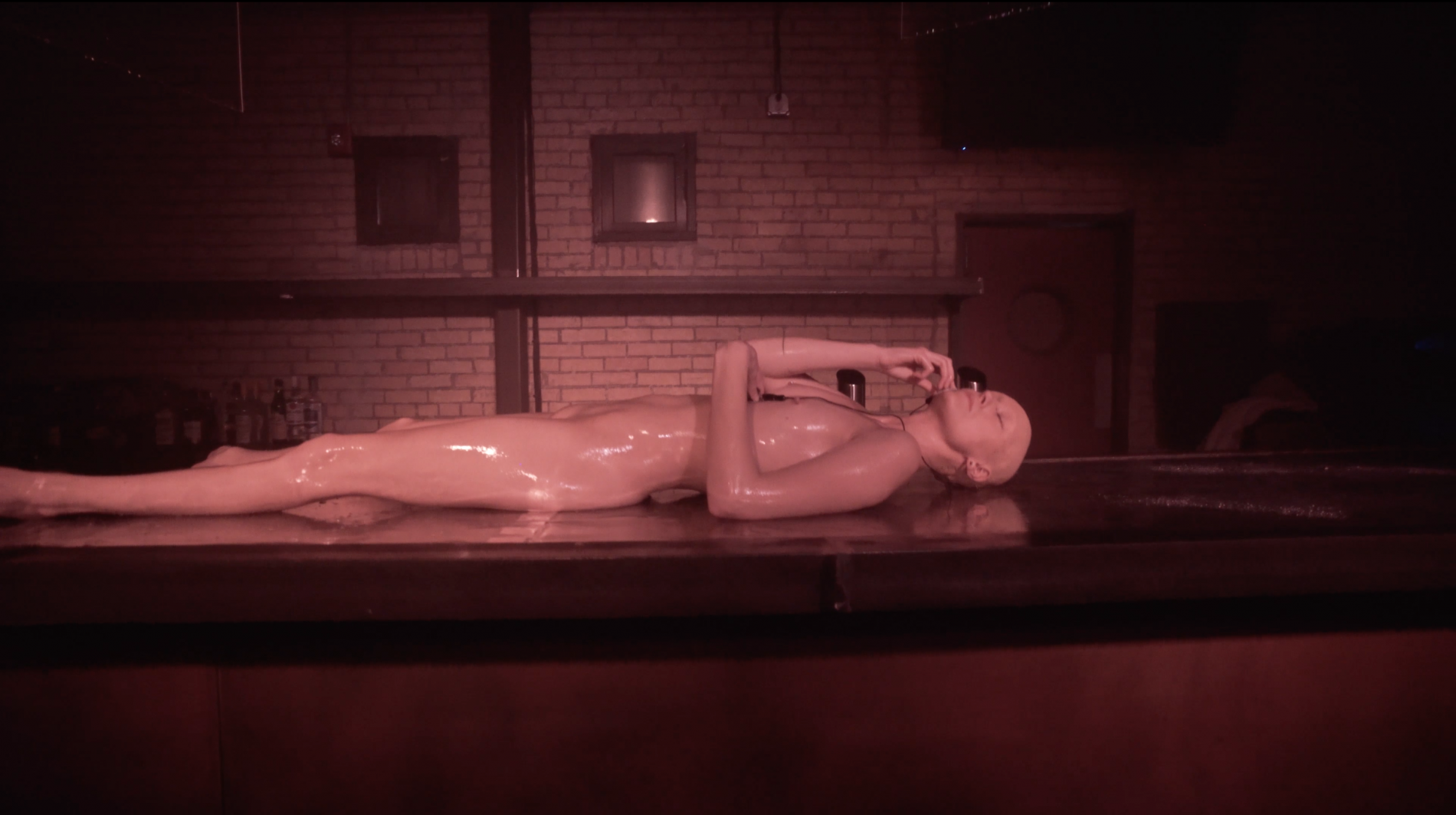 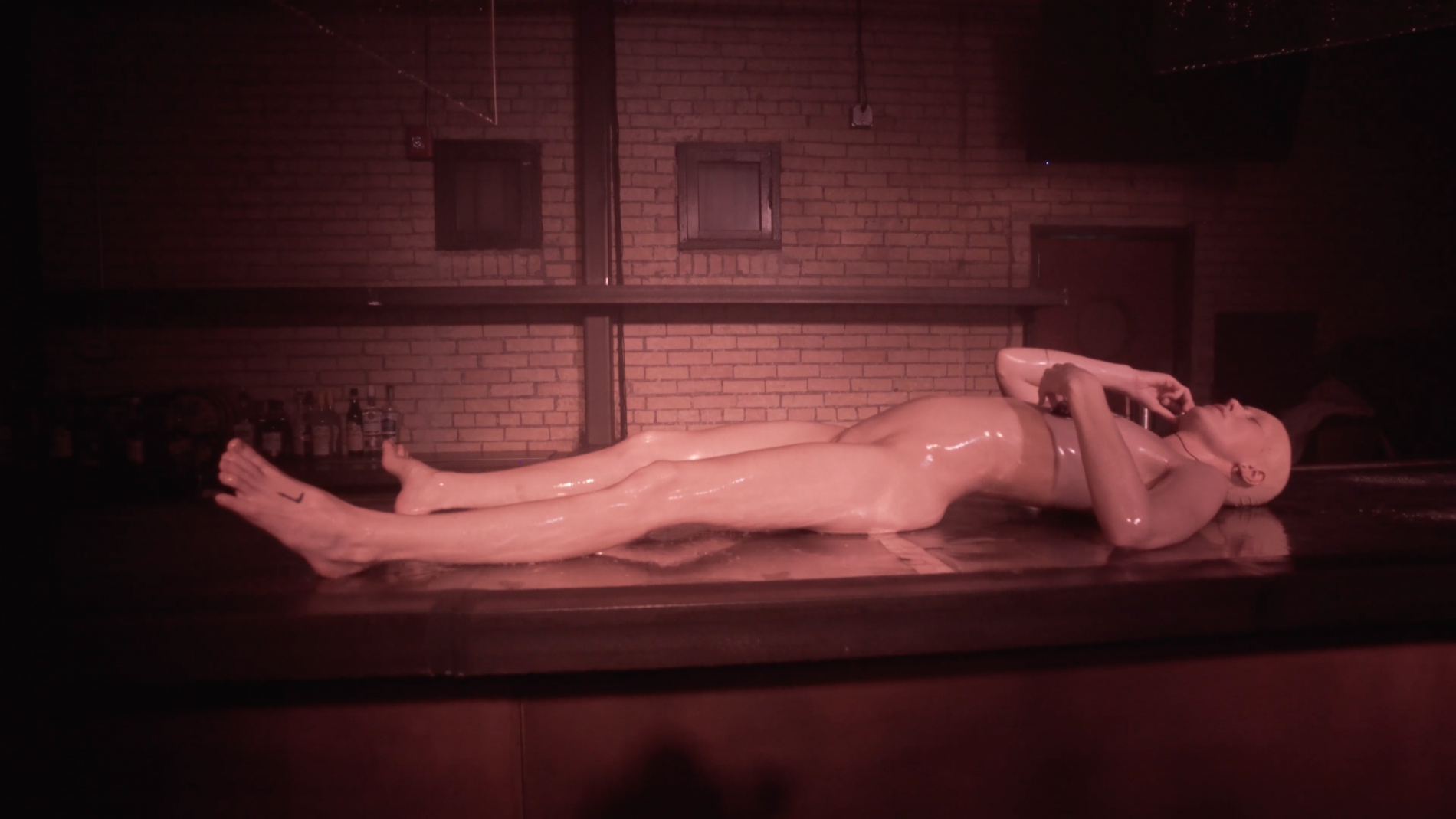 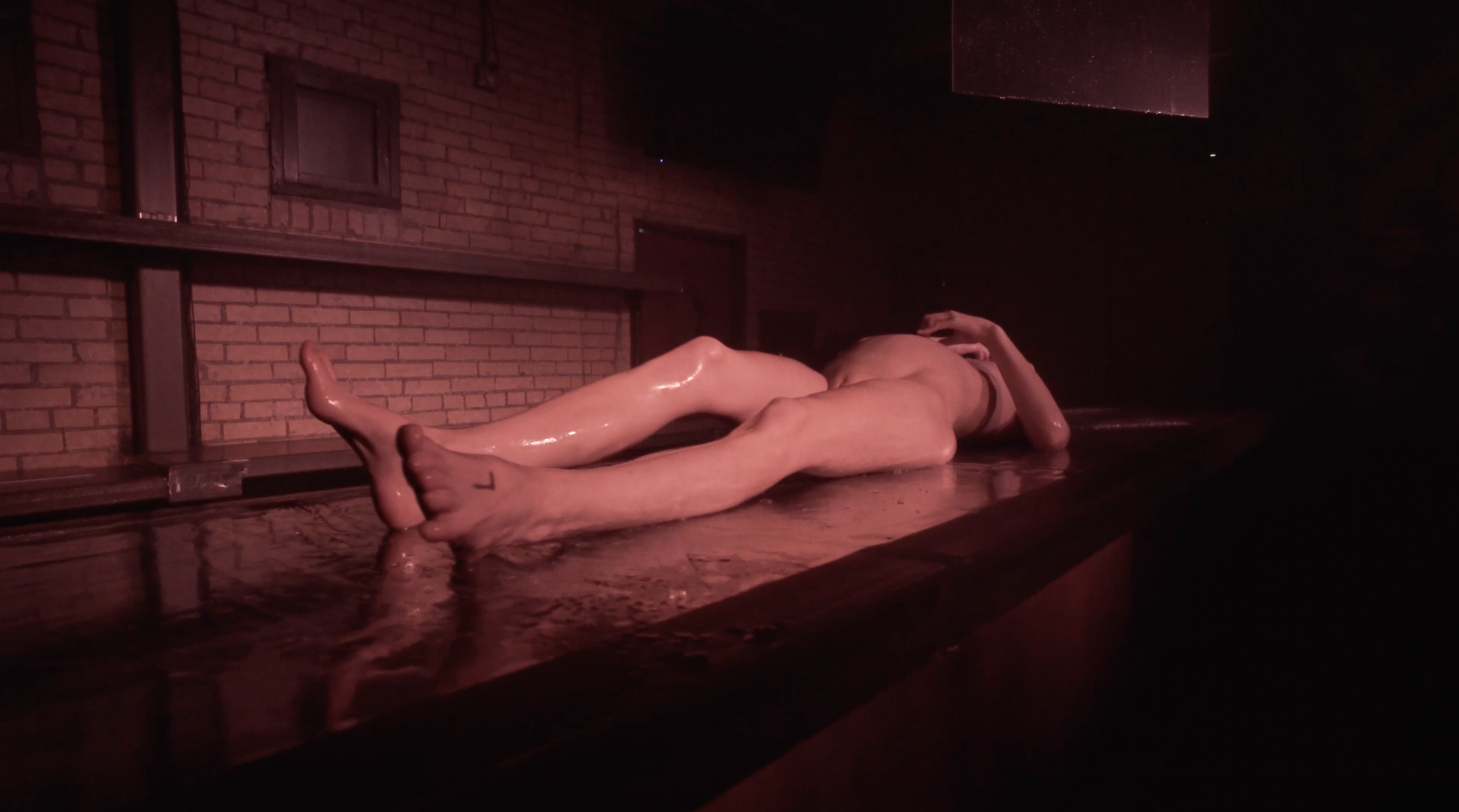 Striking words by Carly Rose and Aynouk Tan, who were there, in Mister Motley: “We are ushered through a door. Upon entering we are met with a nubile, oiled, naked body laying upon a table. Knowing the history of this building one could not help but asking: Is this a dissection or a presentation? Open legs reveal a vagina that winks at us like an in- joke. The body lays still. It seems to be suspended somewhere between a fetus and a cyborg. Bald, naked and yet in a way, not as vulnerable as we are; the spectators glaring at her glowing body.

Performance artist Lisette Ros places small, steel microphones on her body and we are asked to listen as well as look. We hear organs talking, alternated by her breath and heartbeat. It runs faster, filling us with anticipation. It seems the self is not defined by skin, or the shapes of breasts or hands we recognize as human. Moreover it is that what it digests, what beats, what inhales. Ros opens her eyes and meets the gaze of the audience. It shifts the presentation to  confrontation. In the reflection of her glance we encounter our own voyeurism.” Read the entire article on Mister Motley written by Carly Rose and Aynouk Tan here.